Bioresource Technology: A new type of polymer membranes from the IMC

For about two years, scientists from the Department of Polymer Membranes devoted themselves to the development of a polymeric material suitable for the preparation of special cation membranes. The work of researchers from the IMC has now been summarized in a publication in the journal Bioresource Technology. New membranes could replace expensive commercial materials made of a polymer called Nafion.

The Department of Polymer Membranes of the Institute of Macromolecular Chemistry have succeeded in developing a new polymeric material called PSEBS SU22, used for the preparation of cation membranes. Polymer membranes of this type have a wide range of uses, including microbial fuel cells, which are devices that obtain electricity from organic waste. "These fuel cells contain electro-active bacteria, which mediate the oxidation of organic waste by atmospheric oxygen, thus generating electricity in an environmentally friendly way," describes Dr. Miroslav Otmar from the Department of Polymer Membranes.

Currently, commercial membranes of a perfluorinated polymer called Nafion are used for the above-mentioned purpose. However, their use is limited by a high purchase price. "As the experiments described in our publication have shown, the new PSEBS SU22 membranes could replace Nafion in microbial fuel cells. They are even better in most parameters," says Dr. Miroslav Otmar. New membranes were chemically synthesized from the material PSEBS 22 in several steps. "We solved the selection of suitable reagents for individual reaction steps and the optimization of reaction conditions so that the amount of functional groups on the membrane was sufficient and at the same time that the polymeric material of the membrane did not suffer in any way," adds Dr. Otmar. Researchers from the IMC collaborated on the development of these cation membranes with the scientific team Membranes for Bioengineering, Technology and Energy at the Pannonian University in Veszprém (Hungary) led by Katalin Bélafi-Bakó. 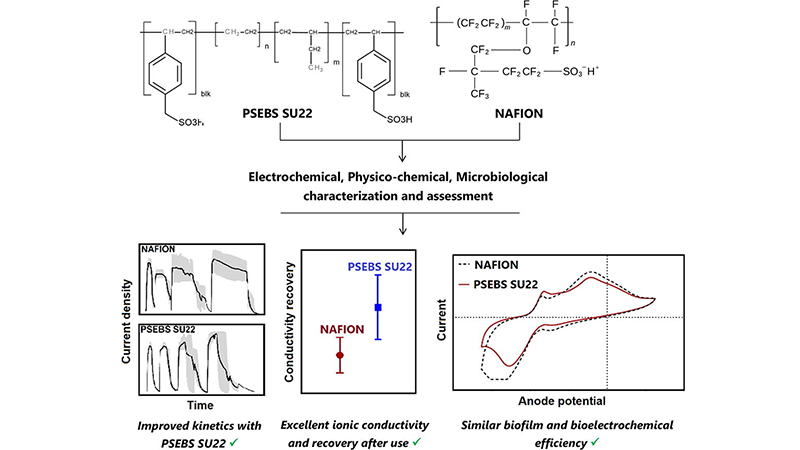