The history of the Czech macromolecular chemistry began in the early 1940s. Several research institutions in polymer chemistry were established within the next decade.

Two outstanding events helped in attracting the necessary support of the then communist government. The first was the implementation of the industrial production of polycaprolactam (Silon) and the second was the great success of the International Symposium on Macromolecules IUPAC which took place in Prague in 1957. The Institute of Macromolecular Chemistry (IMC) was established within the Czechoslovak Academy of Sciences in 1959.

The first director of the Institute was its founder Professor Otto Wichterle. The new building was finished in 1963 and belongs to the national cultural heritage today. From the very beginning, the Institute has attached equal importance to polymer chemistry and polymer physics, and it has held a balance between theoretical, basic and applied research. Consequently, the implementation of its research results was pursued into commercial practice. The most significant practical results were the alkaline polymerization of caprolactam and the development of hydrophilic polymers based on poly(2-hydroxyethyl methacrylate). In particular the latter, developed under the personal guidance of Professor Wichterle led to the production of soft contact lenses in the 1960s and to intraocular lenses in the 1980s, bringing fame to the Institute. 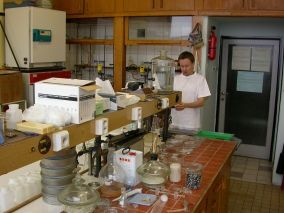 Despite restrictions imposed by the communist regime, the research at the Institute was never confined within national limits. The IMC has actively participated to international cooperation. Prague is the only city in the world that has hosted the important IUPAC International Symposia on Macromolecules three times (1957, 1965 and 1992).

The Prague Meetings on Macromolecules (PMM), organized by the IMC every year since 1967 are well known in the polymer community and are enthusiastically attended.