Regular spherical polymer materials, such as composite particles, combining a synthetic or a natural polymer and an inorganic component are developed in the Department. The focus of our interest shifted from the chromatographic materials to polymer-coated inorganic nanoparticles, which are recently much in demand. Those materials have remarkable properties and they are able to respond to outer stimuli such a magnetic field or light. Using a magnet, such particles are easily separated from media containing various heterogeneous components. Preferably, they are used in biochemistry for isolation of enzymes, proteins, and cells, as well as for the removal of toxic inorganic ions from wastewater. Magnetic components, such as iron oxides (magnetite, maghemite, ferrites), or perovskites, are completely encapsulated by polymers to avoid adverse interactions. For separation purposes, polymer composite particles containing chemical functional groups are needed. Moreover, functionalized photosensitive particles can be used as a marker for the detection of biological substances in immunoassays or like a source of light of a proper wavelength in photodynamic therapy. We are also engaged in the development of surface-modified magnetic nanoparticles for cell labeling, MRI contrast agents and 3-D scaffolds for cell cultures.

• Design and characterization of magnetic oxides (magnetite, maghemite, Cu ferrite) and rare earth doped upconversion nanoparticles (e.g. NaYF4: Yb, Er) which are distinguished by narrow size distribution. They can be prepared by coprecipitation of salts in stoichiometric ratios by a base, or thermal decomposition of organic compounds of appropriate metals e.g. iron (III) oleate, Y(CF3COO)3. Resulting material possesses extraordinary properties which are extremely important for their applications. 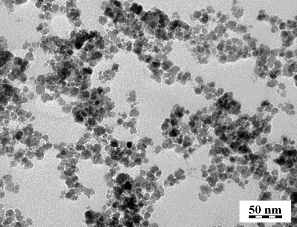 • Multimodal imaging takes advantage of new superparamagnetic iron oxide and/or upconversion (UCNP)/magnetic NaY(Gd)F4:Yb3+/Er3+(Tm3+)@NaYF4:Nd3+ core-shell nanoprobes excitable at 808 or 980 nm. UCNPs convert a low-energy NIR irradiation, that is penetrable deep inside the living tissues, into a high-energy visible light, reduce autofluorescence and light scattering and are photostable. • Techniques of coating of magnetic nanoparticles using modified heterogeneous polymerization techniques (suspension, dispersion, emulsion, or miniemulsion polymerization), or suspension sol-gel transition method initiated thermally or by microwave irradiation. As starting materials, monomers, such as glycidyl methacrylate, 2-hydroxyethyl methacrylate, 1-vinyl-2-pyrrolidone, N,N-dimethylacrylamide, N-isopropylacrylamide, and N,N-diethylacrylamide, or natural polymers (e.g., cellulose) are used. Monomers N-isopropylacrylamide, or N,N-diethylacrylamide provide polymers with a thermal transition temperature between 20 °C and 40 °C. Below this temperature, the particles swell in water, while above it, the particles precipitate. The behavior is used for, e.g., separation of proteins, or drug delivery. 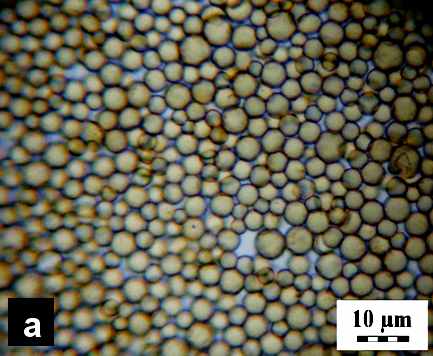 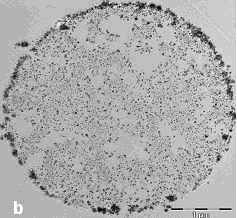 Magnetic poly(2-hydroxyethyl methacrylate) microspheres (a) and cross-section of one particle documenting the distribution of the magnetic filler (b).

• Preparation of functionalized particles by polymerization of functional monomers is possible only under special conditions. Mostly, we modify polymer particles containing universal reactive groups, such as epoxy, hydroxy and amino groups. A specific subgroup of functionalized particles involves surface activation for immobilization of biologically active substances, such as peptides, proteins and antibodies. It requires selective techniques performed under physiological conditions, i.e., room temperature or slightly above it, the aqueous environment and pH 5-9. Activations include modified carbodiimide chemistry, reactions of cyanate and thiocyanate, thiol-ene, thiol-yne and acetylene-azide "click" chemistry. Such microspheres are designed for separation of blood-circulating tumor cells, which is important for diagnosis/prognosis of the disease. 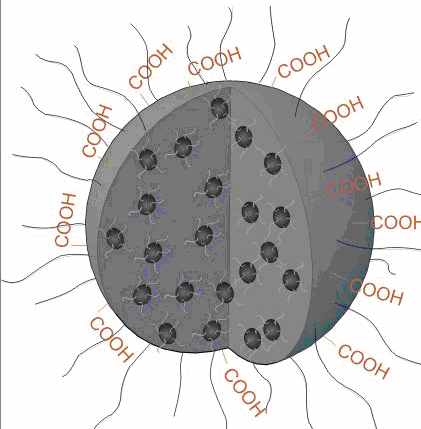 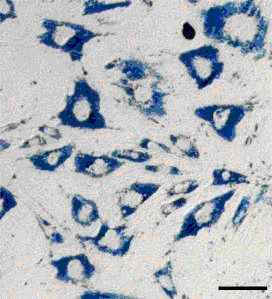 • Magnetic nanoparticles are used for cell labeling (e.g., Langerhans islets, human mesenchymal stem and spinal precursor cells). The labeled cells can be transplanted into the injured body tissue, while non-invasive and long-term monitoring of the introduction, migration, proliferation, differentiation and fate via the total magnetic resonance imaging can be performed

• Modification of magnetic nanoparticles by heterobifunctional diphosphonates. We prepared magnetic conjugates with −NH2, −CH=CH2 and −C≡CH reactive groups for immobilization of different ligands and ion exchangers. Modifications with diphosphonate or poly(ethylene glycol) derivatives is intended for hydrophilization and biocompatibilization of magnetic nanoparticles.

• 3-D scaffolds for cultivation of stem and neural cells for tissue engineering and regenerative medicine, such as healing of damaged spinal cord. 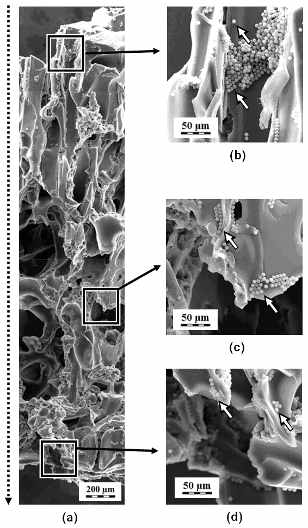 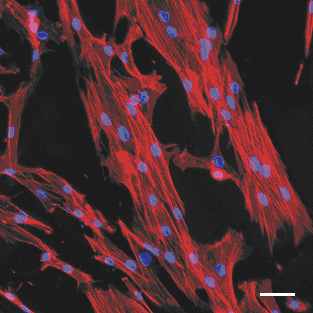 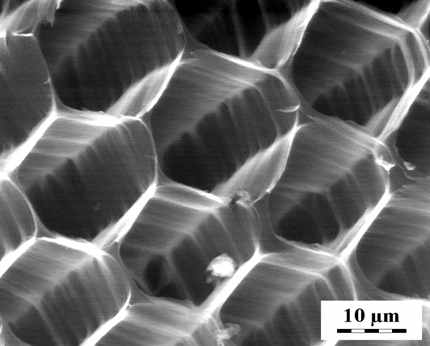