Investigation of polymer networks and gels pursued in the Department includes:

Modelling of polymer networks and gels - structures and behavior

The Department is involved in developing and validation of the theory of formation and structure development of macromolecular (polymer) networks and the relation between the network structure and its properties. We carry out research on covalently crosslinked chemical networks as well as on physical networks such as swollen gels where chain junctions are formed due to physical interactions (Fig. 1).
A recent application of the statistical branching theory combined with thermodynamics concerns phase separation in polymer networks, induced by pregel and postgel cyclization and crosslinking. We developed a semiempirical model describing the relation between cyclization and a decrease in equilibrium modulus of elasticity. 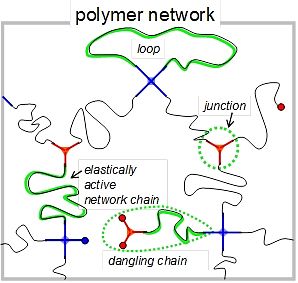 Fig. 1: Scheme of macromolecular structure of a three-dimensional polymer network made by crosslinking of multifunctional molecules.

Volume phase transition in polymer gels is a unique phenomenon characterized by an abrupt and large change of swelling degree caused by some external stimulus – temperature, pH, ionic strength, electric field, etc.
The volume phase transition in gels was theoretically predicted in Prague in 1968 for the first time by Karel Dušek. It was experimentally discovered by prof. Tanaka in M.I.T. ten years later. Since then, it was utilized many times in medicine, e. g., in drug delivery and stimulus sensitive sensors and control devices. The number of publications on these subjects counts now in tens of thousands (Dusek K. et al. 2020).

Yet, the number of polymer gels showing up such transition in the range of stimuli (temperature) required by application is very limited and is often impeded by some undesirable property, e.g., hydrolytic instability of gels.

We have theoretically analyzed swelling behavior of various gels and showed that by external mechanical load, we can trigger phase transition. Our method is based on simulation whether the gels are able to develop the so-called van der Waals loop, a condition necessary for occurrence of the phase transition. If so, on which side of the range of interest the loop is located. Then, a slight change of the chemical composition of the gel can bring the transition to the desired range. Also, it was found that expansive stresses (uni-, bi-, and triaxial extension) can make the transition much more distinct which can be utilized in various sensor devices.

We have studied swollen polymer systems with crosslinked polymer matrix and particulate filler, where the swelling behavior and mechanical response are determined by the molecular structure of the matrix and the surface quality at the polymer-filler interface. The filled systems behave as constrained networks. We simulated their swelling and mechanical behavior with the mean-field statistical mechanics model fed into finite-element (FEM) simulation in three dimensions (Fig. 2). 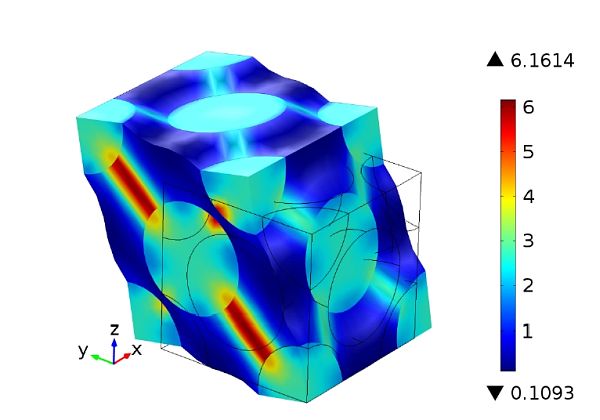 Fig 2: Simulated distribution of volume degree of swelling in a swollen gel calculated using finite element method (FEM) with a swelling model based on the Flory-Huggins approach. The research is conducted in collaboration with the Department of Macromolecular Physics of the Faculty of Mathematics and Physics of the Charles University.

The formation process of a polymeric film characterized by crosslinking and simultaneous solvent release is an example of complex physico-chemical and polymer engineering problem. Crosslinking system must undergo liquid – solid transition superposed with the gelation process (Fig. 3). Typically, crosslinking layers possess gradients in the normal direction with respect to substrate. We pursue elucidating the polymer film formation process to optimize the surface appearance and mechanical properties of the film..

We have investigated link between forming polymer network, gelation, solvent evaporation and film formation properties. We have contributed our knowledge on coating formation to the book edited by prof. Karel Dušek (†2020) and Dr. Mei Wen (Axalta, US) (Protective Coatings, Springer, 1st ed. 2017). In 2018 and 2019, the book was amongst 25% of most downloaded technical books in Springer.

The formation of macromolecular networks in a diluted state can be accompanied by reaction-induced phase separation that leads to diverse morphologies of the resulting materials (Fig. 4). The department is involved in investigation of methods of tailoring the gel morphology at microscopic level and in characterizing deformation the complex mechanical behavior of microstructured materials. 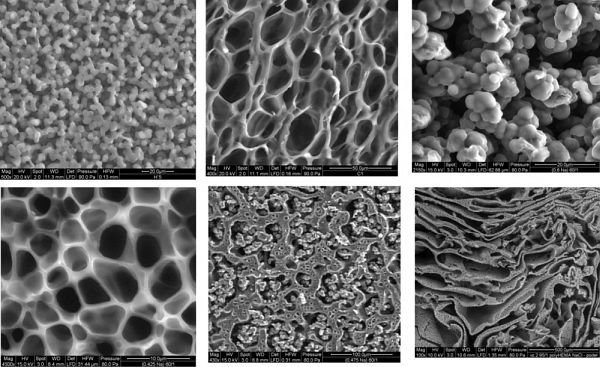 Fig 4: Morphologies of synthetic hydrogels. The changes in thermodynamic parameters during crosslinking lead to the spontaneous formation of various porous structure. ESEM images.

The stiffness and porosity of gel matrix need adjustment to the “needs” of cultivated cells and vice versa; hydrogel composition and properties may trigger specific behavior of growing cell cultures such as cell type differentiation. We are investigating ways how to make gels with arranged pores communicating throughout the whole gel volume and how to precisely tune the pore architecture. Our methods also involve radical polymerization of monomers in presence of inert particulate templates. Chemical composition of the reaction mixture is optimized to control the interactions between the synthetic material and living tissue. Some hydrogels, after certain time of functioning in the living organism, need to be removed. Controlled removal of hydrogel carriers is orchestrated via hydrolytic or enzymatic degradation of incorporated molecules; the synthesis of such degradable molecules is investigated. Recently, promising results in vitro and in vivo were obtained with macroporous scaffolds containing positively charged chemical groups facilitating ingrowth of neural cells. To attract cells to hydrogel surface, we modify it with chemical compounds, activate functional groups, and subsequently immobilize some bioactive motifs (proteins, oligopeptides, or saccharides) (Fig. 5). Hydrogel networks can retain predetermined amount of water or biological fluids without losing their integrity resulting in materials with soft consistence, resembling thus to some extent the living tissues. Hydrogels are therefore in the forefront of research interest as implants in various medicinal application having mechanical function (e.g. tissue expanders) or as drug carriers for local delivery. Fig. 6: An illustration of the bi-layered hydrogel implant for drug delivery to the posterior eye segment.

Nanofibrous materials are currently one of the most intensively studied group of materials for various applications including medicinal field. Their internal architecture, with a relatively high surface area, high surface-to-volume ratio, macroporosity and other attributes predisposes them as promising drug delivery systems for various therapeutic agents. Our department cooperates with commercial company (Nanovia Ltd., Litvinov), where nanofibers are produced using needleless electrospinning technology NanospiderTM (Fig. 7 left). The research we involve includes designing of nanofibrous composition and its architecture, characterization of the morphology, design of the release experiments imitating physiological environment, analytical quantification of the released compounds and in cooperation with other working groups also evaluation of biological response under in vitro and in vivo conditions.
We prepared several nanofibrous materials with incorporated biologically and/or pharmacologically active compounds such as antibiotics, immunosuppressants or anticancer agents (Fig. 7). As local drug delivery systems, they represent a promising therapeutic tool in treatment of extensive bacterial infections or in preventing of tumor recurrence.

More information about news, job offers, PhD positions, UNESCO/IUPAC studies, conferences can be found on the web pages of the Institute of Macromolecular Chemistry