The wall covered with many different artefacts, but also a object of the proffesional botanical interest or; the object of continuos amazement: the city suburb, in this case mostly of Prague.

What is it like?Can we easily estimate ist borders?Can we love it like Yellowstone, Sahara or the Alps?

This small exhibition , pictures of diffrerent landscapes, abandoned corners-they are designed give sort of chaotical, too heterogenous feeling; tvery simmilar like being dropped in some ruined factory at midnight or got lost in thorny, irritating enviroment of some neophytic jungle.

But you don´t need to get lost: I will provide you some explanations of what I consider to be the most remarkable features of such a landscape.

It is some kind of omnipresent humour and dream-like events, which are one of the first and last reasons, why to be aware of progressive suburban „unification“- featured by synthetic grasslands or violent spreading of indifferent „green“...and this is called to be a recovery!

It is not only boring....it also suppress part of us, by mistake considered to be somehow „darker“, „wilder“..... But it is also core of our minds, firmly dwelling in the shrubs behind the last public transport bus station....which, feeding on our ignorance, will soon call back. Will all the giant hoghweeds, japanese knotweeds or agressive slugs destroy our perfectly organized order in the end?

Recovery : the background of this exhibition

You are welcome to explore an (simplified) attempt to introduce the city suburb in its natural state: slightly or very „messy“, ungeneralized, raw... so as you might observe it „in natura“. The periphery (a shortcut word which I will use in the rest of the text) is believed to be well distinguishable from the rest of the landscape mainly because of high content of locally-limited, unique phenomenons (such as, in terms of botany, some very exotic itroduced species, or-culturalysome uniquely built homeless shelter etc.).

However, there are some obvious general characters of the periphery, which can be seen from far: high content of the brownfields, extensive areas of invasive species (both animals and plants), great extent of gardening colonies or very high frequency of the homeless shelters. Some of these phenomenons can occur also in the contryside- but the periphery contains all of them in a unique combination.

This is the source of some presented pictures: happening, during which we aimed to walk the circuit around Kladno and Prague cities (with other „shrubbers“, as we call ourselves, banner which we used to mark the path is on picture nr. 1), happened in the spring of 2011. It was designed to estimate experimentally, which part of the city can be called „periphery“ (of these two cities).

Selected criteria to delimit, identify the periphery were mainly to have no problems light the fires and sleep outside freely (we have proved, that it is possible to burn the tractor tyre without being noticed); and that it is possible to paint graffitti or create different land-art objects freely. It lasted a week and we passed about 150 km - that is following where the following observations come from.

The periphery prestents- contrary to the boring block of flats, designed for unchanging, stable and mechanized life- some free creative space, where the restrictions are quite weak: this is appreciated by some humans (very roughly called „homeless“) but also some plant species, which are sometimes very aggressive ones spreading quickly trough the landscape, but also longremaining pieces of gradens or room plants, surviving thanks to „windows of opportunities“, created by extremely favourable enviroment conditions.

Similary to very cosmopolitan, obscure combination of the plant species, there are some sections of the entire landscapes reminding some very distant type of habitats like tropical forests, savannas or salty semi-deserts. That is all created by unique mixture of both domestic and allien plant species.

One of the most remarkable nature of the periphery, which is the most obvious for the broad public, is some kind of „purposeless“. That often causes almost hate, desire to delete it, „harmonize“ it, fill it with perfect gardens of the „public green“ and lines of prefabricated houses. Because it´s full of needles, narcomans and rubbish, because it puts so common and often intime object of daily use into very uneasy, and sometimes shaming context (rose in broken glasshouse, tootbrush in a piece of shit)

There are no signposts, no offcial entrance... strangely structured, thick vegetation, but only unexpected, often thought but suppressed things... no opening hours. Unprotected country, out of the interest of nature conservation.

How regionaly limited the term of „periphery“ limited can be, shows the picture nr. 2: the edge of the market in Mexico City; such a city reminds some kind of large periphery for the Europeans. This text doesn´t even try to be objective and sides the periphery against the „well organized“ landscape as a part of the exhibition: to produce the contrast and discussion.

Because it is clear, that the difference between the „homeless“ and the „snobby“ is very slight, if any: what matters, is the „state of the conscious“ of the city. It matters which parts of the city landscape we identify with the periphery (good example is part of the old centre in Istanbul on picture nr. 3; where the sense of the centre and the periphery is the true opposite to central Europe and the centre moves to the edge).

The periphery deletes the border between the desire and random (as shown on pic. 3, where it is hard to say what we see- the city park? succesion of woods on an abandoned place? waste disposal? the playground? market?) in the very simmilar way like the subconsciuos of our minds does the same when dreaming. We fight against its suppression, because what can happens if we destroy the last remaining space for everything banned?

This exhibition would like to show the process of „healing“ in the general sense of replacing the diverse, largely unknown periphery with block of flats, shopping centres etc. and what does it causes deep in city´s subconscious with many possibilities how will the catharsis be in the end.... But don´t we already know it?

If thou openest not the gate to let me enter, I will break the door, I will wrench the lock, I will smash the door-posts, I will force the doors. I will bring up the dead to eat the living. And the dead will outnumber the living.

(descent of Ishtar in the Underworld, old Mesopotamian text)

Notice: other pictures, objects and movies presented were collected during several trips to the periphery of Prague and Liberec and also during the happening „Shrubby Days on Ronna Heap“ in 2010 near the industrial city of Kladno

Other persons who have greatly contributed to this exhibition: 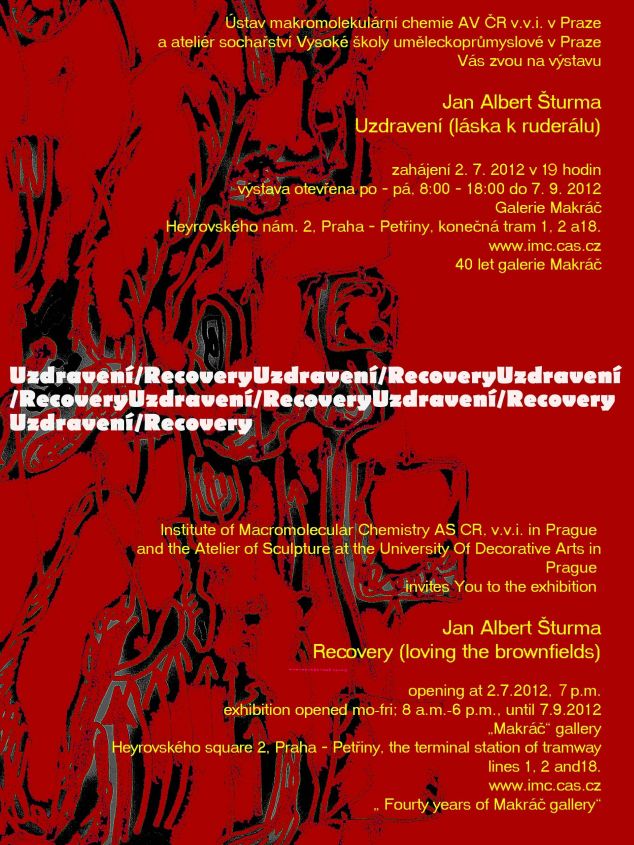 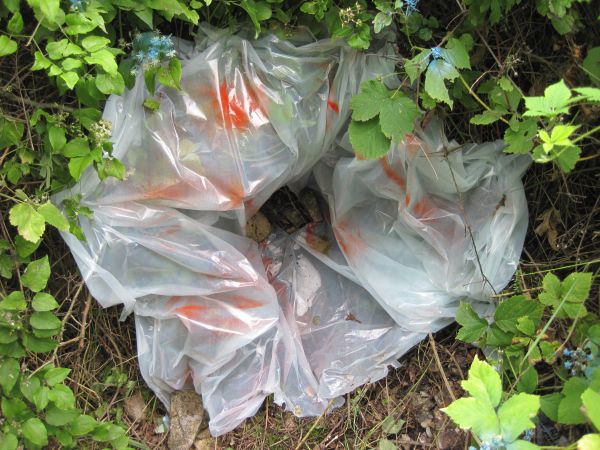 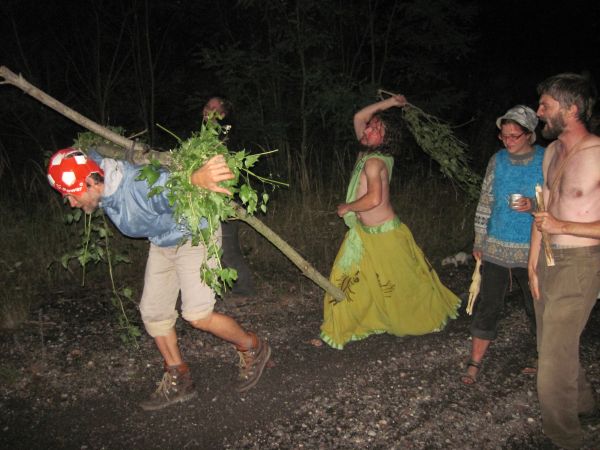 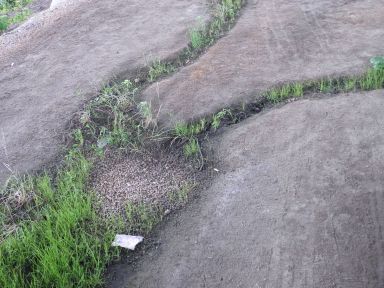 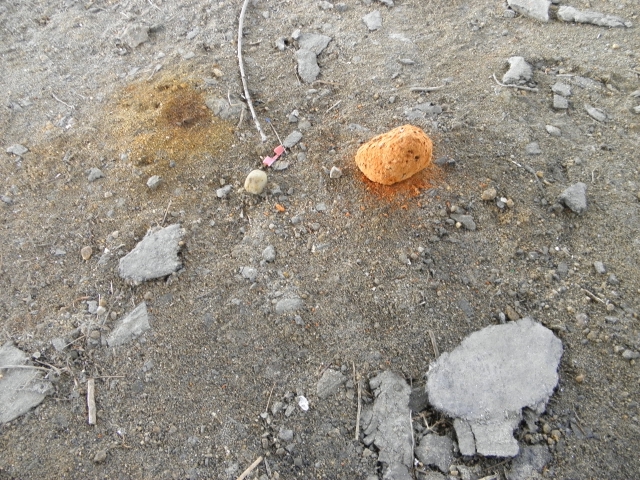